I LOVE our Savior, Jesus Christ.  Jesus has saved me from myself, and He has lead me to The Church of Jesus Christ of Latter-Day Saints.  (His true church bears His name.)

Since I joined this LDS faith, I have learned to live and love so that Jesus will be proud of me.  My whole life has changed since I joined the LDS church, and I have accepted His Gospel.

I have also learned to pray in a manner that reflects Heavenly Father is my spiritual and eternal Father, and Jesus Christ is my brother, Savior, and best friend.

Now my prayers sound like I know who I am talking to. And I have to admit, this has been a learning process for me.  One that I embrace, enjoy, look forward to, and depend upon.  I have learned that my prayers are heard.  Always.  The divine answer might be, “no.” but sometimes it is, “yes”!!!!  And I always know that I am talking directly to my Lord and my God because I feel him.  How?  From a quiet, still voice that speaks through the Holy Spirit and gives me goosebumps, chills, and tears.

And I always close with,”In the name of Jesus Christ.”

Amen.  Do you have goosebumps all over?  I do. 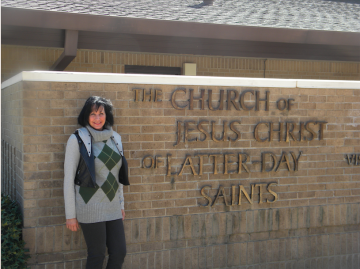 My husband and I wanted to join The Church of Jesus Christ of Latter-Day Saints. We had been reading about this amazing church, and we knew we wanted to be baptized by water so we could go to heaven when we died.  A family member had called me and told me she had joined this church.  She had us meet a member of the LDS church, and we fell in love with every aspect of this church.  We drove to a service on a cold Sunday in January, 2011.  We were so excited because we thought this church would baptize us that very day and we would be saved.

As we sat in the back, we watched the members as they lovingly touched each other and could see their love as they gazed at each other.  That day we met the missionaries  We were sad that we couldn’t be baptized that very day, but we were willing to do anything they asked of us in order to join their church.  I loved standing next to a church member as I inhaled the beauty of their aura.  I didn’t know exactly what LDS members had,, but I knew I wanted it.

We made an appointment to have the missionaries come to our home.  We asked them to come the very next day ,and they giggled and agreed.  I will never forget the way our home literally came to life with light everywhere.  I felt things in my chest that I had never felt before.  These 2 young men brought pamphlets for us to read, and we gobbled up every word.  We always started our meeting with a blessing.  I had been raised Catholic so I only knew the same old prayer.  But these Elders spoke to God as if they knew Him and prayed as one friend to another.  This was the first time I heard ‘God’ referred to as our Heavenly Father.  At the first lesson, I asked the Elders why they called upon our God as our Heavenly Father.  How exciting was the answer. I learned that we have always been God’s children, and that we always would be.  I learned about the ‘Plan of Salvation’ that was formed in heaven.  Their lesson on this plan included learning about our Heavenly Father’s plan to give us a human body, the opportunity to become a heavenly family, and return to our Lord and God if we obeyed his commandments.  I understood that there was a soul, named Satan, who had a different plan for us and that if I came to earth, that meant I had chosen to follow ‘The Plan of Salvation’ in a positive manner.  I was taught that satan was kicked out of heaven.  Our Heavenly Father cast the devil and his followers to earth.  This satan was so angry that he decided to tempt those who came to earth to follow him.  Heavenly Father gave us ‘agency,’ which means we can do what we want, follow His plan or follow satan.  I have chosen to obey the commandments and to follow His ‘Plan of Salvation’.  This plan also includes Heavenly Father’s wishes for his first born son, Jesus Christ, to live on earth and die on the cross.  Heavenly Father knew we would sin and that the only way we could be forgiven of these sins was for Jesus to die on a cross.

I wept as I felt the love of Heavenly Father and Jesus Christ.  I cried for days as I realized the sacrifice of both Father and Son.  I became determined to follow His commandments, join ‘The Church of Jesus Christ of Latter-Day Saints’, live a life worthy of this ‘Plan of Salvation’ and return to our Heavenly Father to live with Him forever.

My LDS faith and my near-death experience taught me that we will see our dearly departed again.

We all know we must die some day. When we die, the loved ones we leave behind are sad, full of pain, and miss the dearly departed. These poor relatives and friends feel lost and lonely with their loss. Often times I hear these mourners say, “If only I could speak or talk to that person just one more time.” You can, You loved ones are still nearby, they are living in a spirit world. They can hear you and see you, You just cannot see or hear them until YOU die.

Feel free to talk to those who have gone before you. Isn’t that exciting to know? Your loved ones are in a spirit world. They can see you and hear you. So please talk to your loved ones you have lost. There is only a thin veil you which Heavenly Father created for reasons we will learn some day. If you accept this truth, it will help you during your mourning. Learn to talk out loud when you are alone with your loved ones. Tell them what you wished you had told them before they died. Make it a habit every day to tell them you know they are there. Tell them about your day and share your feelings, fears, hopes, and anything else you normally would if they were alive. Now don’t you feel excited. Soon you will have a “feeling” that they heard you. They have. I know this, and I use it every day. Have you ever had “a feeling” you should or shouldn’t do something. The Holy Ghost can share these answers with you.

Your departed members are still concerned about you. In my new book, coming out in May, 1, 2018, “VISIONS OF HEAVEN, What My Near-Death Experience Taught Me About Eternity,” I share many examples of how our loved ones who have passed have helped myself and my husband and I know you will come to understand and accept what I know is true.